Sometimes times just goes by so fast. We’re back in 2010 when the post-punk band called Love A found together. Back then they were still called Love Academy. Only a year later their debut album ‘Eigentlich’ was released via Rookie Records. After that three more albums were released and way too many concerts that one could name the highlights of the last ten years. But anniversaries need to be celebrated so we’re happy and proud to present you a 10 year anniversary tour with a couple of our favorite venues in Germany and Switzerland.

We are selling exklusive hardtickets via TixForGigs. The tickets for the Zurich show are available on Ticketino. 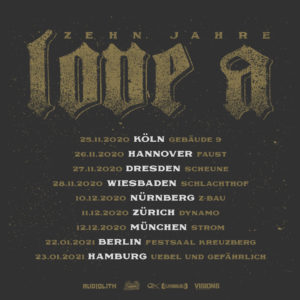